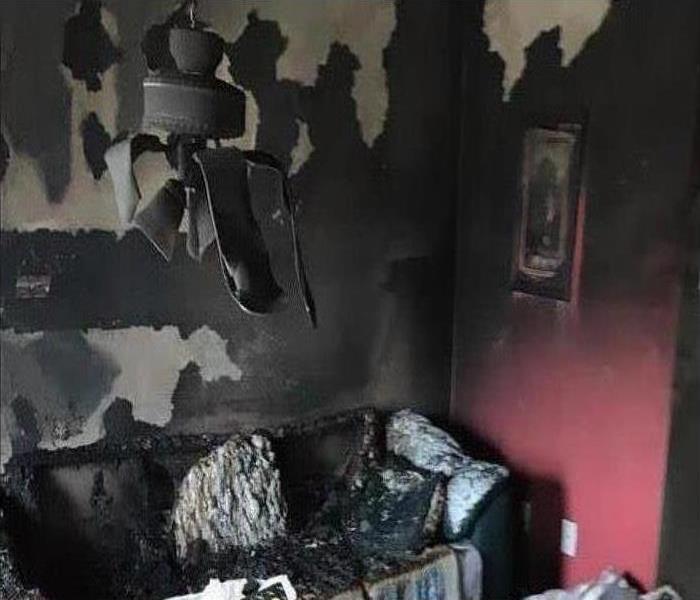 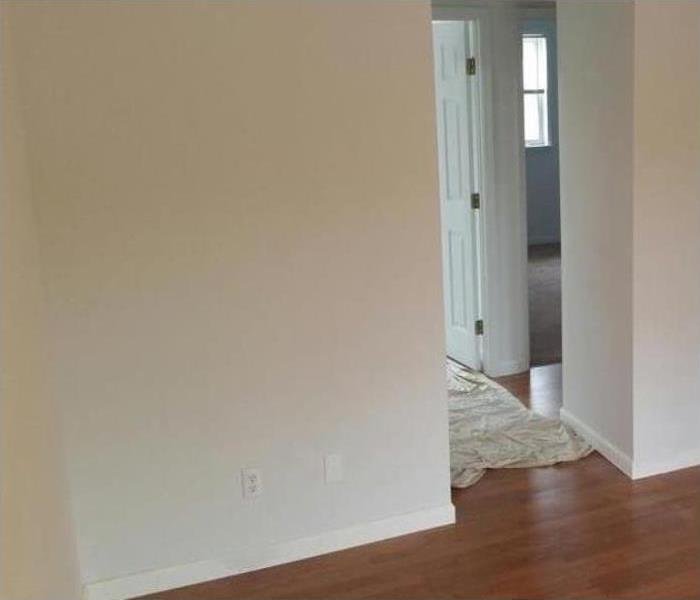 Professional cleanup is a must for the best outcome after fire damage affects an Arlington residential or commercial property. As seen in the Before Photo, this living room had significant damage from the heat and smoke, such as:

- The walls are stained with soot

- The ceiling fan blades are melted

- The couch has severe charring

SERVPRO techs must scope the property and determine how widespread the soot, fire damage, and potential water damage is within the home. Another issue is the structure itself. It is not uncommon for the roof, walls, or ceilings to undergo damage from the heat and flames to certain areas requiring a tarp or boards to halt the potential for any further damage to the residence from rain.

During the assessment of the property, a team of technicians removes items from the worksite. Some of these items go to cleaning stations set up outside, and other things, such as the ruined sofa and charred ceiling fan, require disposal as there is no potential for reuse through cleaning or repair. In this case, things are only disposed of with permission from either the homeowner or adjuster. Before getting removed, the article gets photographed, and a detailed description is written so its current state can assist the property owner in filing any insurance claims.

This type of fire can spread smoke damage throughout the residence. In cases where bedspreads, curtains, or clothing stored in closets absorbs the strong fire odors, SERVPRO technicians can help. The techs have access to a device known as the Esporta Washing System. This powerful piece of equipment can remove smoke odors and stains in just a single cycle. SERVPRO's techs using this system can assist Arlington property owners in limiting the loss of favorite washable clothing items.

Before any reconstruction or repairs to the structure can occur, all traces of fire odors need to get removed from the home. SERVPRO techs run air quality improvement machines such as air scrubbers during the fire restoration services. Removal of charred items and building materials is another step forward towards getting rid of the pungent odors in the house. A final step involves the use of various types of odor control measures. Equipment such as hydroxyl generators is safe to use around pets, plants, and people as it emits UV rays that neutralize airborne soot particles. Other applications such as thermal fogging require that the residents and pets vacate the premises during the procedure.

The After Photo shows the outcome from a professional fire damage restoration service. SERVPRO technicians have replaced the flooring with newly installed laminate floorboards, and the walls have been replaced, primed, and painted. The technicians' goal is always to leave the home, "Like it never even happened."

View More Before & After Photos